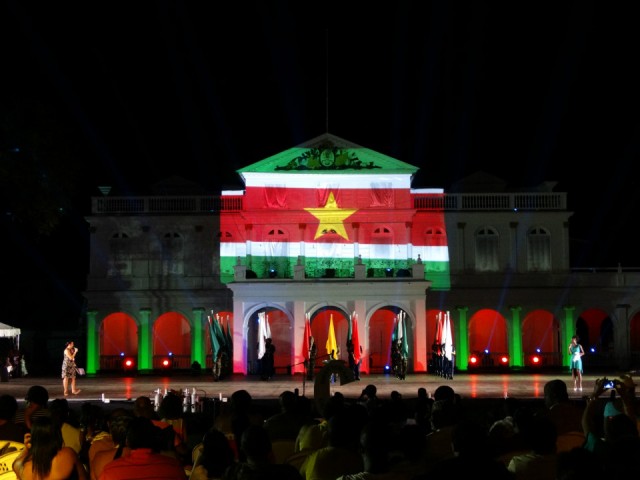 Sign up for a wonderful fieldtrip! Scroll down to view videos!

This conference will be organised in order to commemorate:

(Organized by the  History Department of the Faculty of Humanities, the Institute for Graduate Studies and Research (IGSR)  in collaboration with  the Social Science Research Institute (IMWO) of the Anton de Kom University of Suriname,  and with support of  the National Archives Suriname (NAS), the Directorate of Culture (Ministry of Education, Science and Culture) and the following cultural organizations: NAKS, Federasi fu Afrikan Srananman, CUS, NSHI, VHJI).

The present Surinamese and other Caribbean societies are a product of different forms of migration of people, starting with the coming of the Indigenous people thousands of years ago, followed by colonization by Europeans who subsequently introduced African slaves and indentured labourers from Asia. In Suriname we experienced flows of new immigrants who arrived from Guyana, Brazil, Haiti and China. In our contemporary world we have experienced also the migration of people from the Third World to more developed countries.

Since the second half of the 20th century another  migration process is taking place as a consequence of which a large proportion of the population of postcolonial states is presently living in Diaspora. In the age of globalization, boundaries between states are vanishing while in relation to modern migration and Diaspora there are transnational links and loyalties, which sometimes have been perceived as problematic. The responses in many states about the influx of migrants are diverse, from hostility to solidarity. Europe and the USA are trying to stop migration via different measures, varying from agreements with sending countries to the construction of a border wall.

Suriname shares with the Caribbean and other postcolonial states an experience of European colonization, African slavery followed by immigration of indentured labourers from Asia, and massive emigration to the developed world during the second half of the twentieth century.  Many of the processes and developments are not unique for one country or a region; on the contrary, we see that those problems and issues can be compared with each other. So we can understand our present world much better and will be able to find solutions for different problems by comparing those issues.

Aim of the conference

The aim of the conference is to connect historical specificities of slavery, indentured labour and migration to contemporary issues of globalization, Diaspora, identity formation, nationalism and transnationalism.

At the same time we want to promote new perspectives and approaches in the study of forced and free migration and their impact on the society. By bringing scholars together from various parts of the world – senior scholars as well as new promising talents – we hope to stimulate exchange of ideas, set up new networks and strengthen existing ones.

Central theme: Linking the past to the future: how can knowledge of the past contribute to a better future?

Some questions to be answered during the conference are:

Suggested themes based on the abovementioned questions.